Sadly, the man who created autocorrect died yesterday.
His funfair will be hello on monkey.

Today’s delightful trawl through double live albums from the 70’s features famed Irish blues guitarist, the late great Rory Gallagher; a man who was no stranger to live albums. Before the release of the double live Irish Tour ’74, he had already released 3 live albums: two with his previous band Taste, and a single album called Live In Europe. 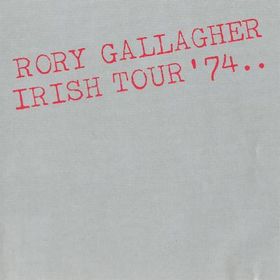 Gallagher’s 1974 tour of Northern Ireland coincided with one of the most tumultuous times in the region. Violence from Irish Republician Army terrorists was erupting throughout the region at public events such as rock concerts. In this environment most groups didn’t tour the region but Gallagher continued his tour as planned to Belfast Ulster Hall, Dublin Carlton Cinema, and Cork City Hall. The day before Gallagher’s scheduled concert in Belfast ten bombs went off at various locations around the city. Everyone expected Gallagher to cancel as all the other big names had but he went on with the concert. A local Belfast journalist writing to describe the concert said:

“I’ve never seen anything quite so wonderful, so stirring, so uplifting, so joyous as when Gallagher and the band walked on stage. The whole place erupted, they all stood and they cheered and they yelled, and screamed, and they put their arms up, and they embraced. Then as one unit they put their arms into the air and gave peace signs. Without being silly, or overemotional, it was one of the most memorable moments of my life. It all meant something, it meant more than just rock n’ roll, it was something bigger, something more valid than just that.”- taken from Wikipedia.

Rory always preferred playing live than in studio, he liked to feed off the energy of the audience and on this album he’s really firing on all cylinders. From the opening bars of Cradle Rock to the final track of Just A Little Bit, Gallagher and his band (Gerry McAvoy on bass, Rod de’Ath on drums and Lou Martin on Electra piano) put on a show that give you goosebumps. Drop the needle on any track and hear a blues master at work: whether it’s the blistering guitar on Walk On Hot Coals, the acoustic slide chops on As The Crow Flies or even the slide on Who’s That Coming, Rory puts on an amazing masterclass and when it’s over, all you want to do is start all over again.

Is it excessive? No way. Only 2 of the 10 tracks are over 10 minutes. This is a lean, mean double live album. Would I listen to it again? Damn straight! If it wasn’t for my Xmas playlist and other double live albums to review, I’d have this on a loop! Would I recommend it? I would. It’s a great live album and it’s captured the intimacy of the show. It does make you feel like you are there. There’s also a concert film of the same name which is well worth your time. Is there a drum solo? No. And that will always be a good thing.

Marks out of 10? I’m gonna give 9.5 Quite frankly, it’s a great album, it’s a great performance and you should listen to it tout suite. Next up on this live re-evaluation thread: proof that a kind, loving God does not exist! TTFN!

I'm just a creature from the heap so excuse my savage ignorance. View more posts